By Ivy Manning on December 7, 2009 in bacon or not, cabbage, gnocchi, Italian, married a vegetarian 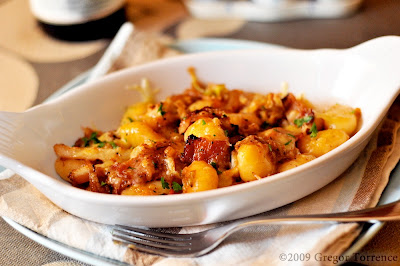 Don’t know about your neck of the woods, but it is bitterly cold here. So cold, in fact, I am reminded of a fabulous driving trip I took with Mr. Tofu to Northeastern Eatly, er, I mean Italy.
It wasn’t snowy and cold yet when we were there in September, but the farther north we got, the more the villages and landscape looked like scenes from the Sound of Music and the cozier and more German-inflected the language and food got. In pine timber lined dining rooms in front of flagstone fireplaces incongruously situated in the center of the rooms, we ate cozy dishes that married the finesse of Italian cooking with the heartiness of Austrian and German cuisine.

Dishes like this rib-sticking gnocchi. The word gnocchi has German roots and roughly translated means “knot of wood, ” probably because of their little round shapes. Though the word has Germanic roots, Italians all over Italy pair the potato-based dumplings with traditional pasta sauces like tomato, basil pesto and the like. But further north, you’re just as likely to find the tender little pillows of dough tossed with nutty cow’s milk cheese, speck (smoked bacon), caramelized onions, cream, butter, and even tender cabbage.

While I love to use Niman Ranch’s stellar smoky applewood bacon in this quick weeknight dish, my vegetarian husband Mr. Tofu does not appreciate the pork. So after I point out to him what he is missing (and he ignores me), I toss half of the gnocchi with the rich sauce sans bacon. Then the remaining gnocchi and onion-cabbage sauce gets the bacon treatment for me.

On a good day, I make my own gnocchi, I really do. (Email me if you’d like the recipe.) But on busy days, I buy frozen gnocchi from Sheridan Fruit Market in Portland, Oregon. They taste of potato and have a nice light texture, plus you can boil them from the frozen state, so dinner can be ready in about 8 minutes, if you play your cards right. If you’re not lucky enough to live here, try Trader Joe’s gnocchi. They aren’t half bad; not too gummy with a rich flavor akin to the real deal Italian gnocchi. 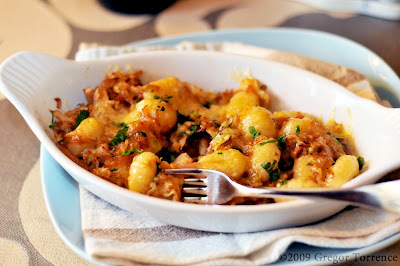 Tyrolean Gnocchi with Cabbage and Sometimes Bacon
Serves 2 to 3

Heat the oil in a large skillet over medium high heat. When the oil shimmers, add the onions and saute, stirring frequently, until they begin to brown, 5 minutes. Reduce heat to medium and continue to cook until the onions are light brown, 3 minutes more. Add the garlic, cabbage,caraway, and 3 grinds of pepper. Cook, stirring frequently, until the cabbage is wilted, tender and beginning to brown, 7 minutes. Add the broth, bring to a simmer, reduce heat and cook until liquid has reduced by half.

While the sauce is cooking bring a large pot of salted water to a boil and preheat broiler. Microwave the bacon until crisp, reserving some of the fat; set aside. Add the gnocchi to the boiling water and cook until they float to the surface and are tender when bitten into, about 7 minutes for frozen gnocchi. Drain the gnocchi.

Toss the remaining gnocchi, sauce, and bacon with 1 tablespoon of rendered fat together in another gratin dish. Top with remaining cheese. Place both gratin dishes under the broiler and broil until cheese melts, 3 minutes.

12 Responses to Tyrolean Gnocchi with Cabbage and Sometimes Bacon