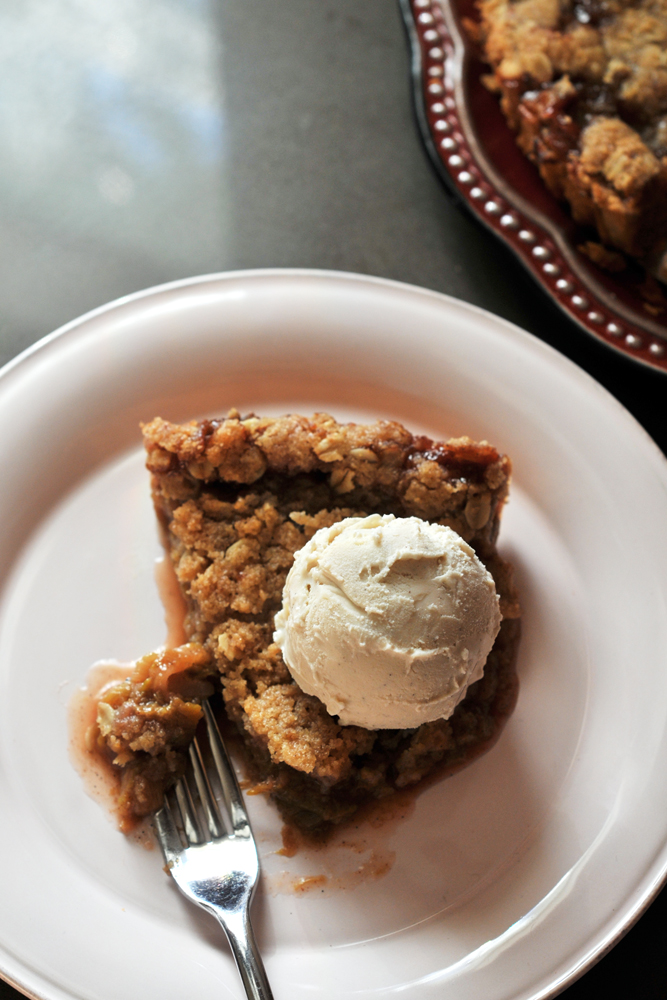 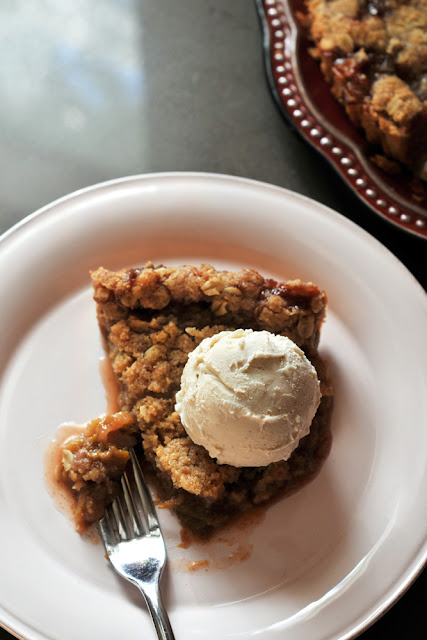 Finally, spring is here. You can’t tell by the weather around these parts, but I know it by the little rhubarb plant in my back yard. We accidentally built our raised bed garden over it, but it keeps coming back around one edge of the planter box, year after year. A faithful and loyal plant that announces that spring has, if not sprung, at least decided to be near. 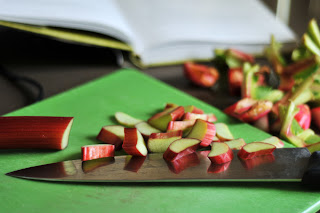 Since the little plant is challenged, what with tons of soil and wood pushing down on part of it, I always feel just a little guilty cutting the stalks for pie. This year, to honor the little-plant-that-could, I made something really special with it. Not just a plain ol’ rhubarb pie, but a tart, a really special tart. 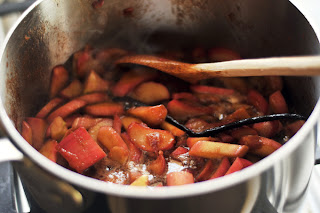 I treated the stalks to a long, slow stew with a whole vanilla bean, and not too much sugar. I tucked it into a butter-egg yolk tart crust.  I sprinkled the tart with a cinnamon-oat streusel, for a crispy counterpart to the creamy rhubarb. And then I topped it with a scoop of homemade sour cream brown sugar ice cream, a crown befitting royalty.

So now that is done, Spring has officially sprung.   Now, I’m going outside to tell my little pea shoots that it’s time for them to get going. Maybe if I blow on them, they’ll grow a little faster… 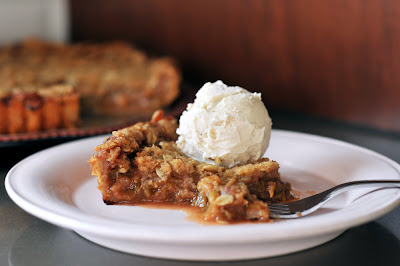 
In a food processor, pulse the flour, sugar, salt, and butter until butter is in little pieces no larger than a pea. Whisk yolks in a measuring cup and add enough water to make 1/4 cup of liquid. Add to flour mixture and pulse until dough just comes together. Wrap in plastic and chill for 1 hour. Roll out on a lightly floured surface into a 12-inch round. Ease the dough into a tart pan and trim ends. Refrigerate until ready to use.


Preheat the oven to 375 F. Make the streusel by pulsing ingredients in a food processor until crumbly. Refrigerate until ready to use. To make the filling, combine the rhubarb, sugar, and cinnamon in a medium saucepan. Split the vanilla bean lengthwise and use a butter knife to scrape out the seeds. Add the seeds and pod to the pan. Bring to a simmer over low heat and cook, stirring frequently, until the rhubarb is tender, almost falling apart. Place in a wide bowl and refrigerate until filling is room temperature.


Place the tart shell on a baking sheet lined with foil. Fill with the rhubarb, discarding vanilla pod. Sprinkle with the struesel mixture and bake until bubbly and golden brown, 45 minutes. When cool enough to handle, remove tart ring and serve with ice cream.


For the ice cream, scald the half and half over medium heat. In a large bowl, whisk the brown sugar and egg yolks together. Slowly whisk in half the half-and-half. Return mixture to saucepan and cook over medium-low heat, stirring constantly, until the mixture coats the spoon, 5 minutes. Do not simmer. Strain mixture through a fine sieve, whisk in the sour cream and chill until cold.  Freeze in an ice cream maker according to machine instructions.
-Adapted from The Farm to Table Cookbook, by Ivy Manning (Sasquatch, 2008)

This site uses Akismet to reduce spam. Learn how your comment data is processed.