By Ivy Manning on September 6, 2009 in Ireland, mashed potatoes, potatoes 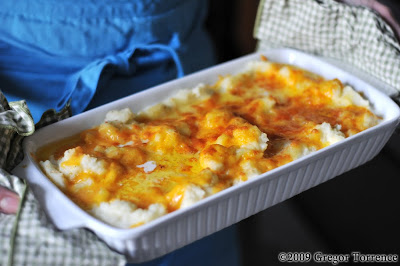 I promised that I would pen a few recipes inspired by the lovely trip I took with my father, brother, and Mr. Tofu to Ireland, but truthfully the weather was so sunny and warm, it’s been hard to get a hankerin’ for potatoes and the like. Until yesterday, when a huge grey cloud wandered over our house, opened up, and dumped impossible amounts of cold rain on us and our (slowly) ripening tomatoes, causing them to split.

The grey skies had me nostalgic for Ireland, in particular a stellar, no, life-altering, gratin of cheddar-cloaked mashed potatoes we had in Birr, County Offaly. Birr is a charming Victorian town full of narrow one-way streets lined with shops, a 15th century castle with an enormous telescope and astronomy museum, and most notably The Thatch Pub.

I asked the front desk clerk, a doppelganger for Rose McGowan, for a recommendation for the best “real” pub in town. She suggested “da tatch”. I was skeptical. My dad, a publican himself, is a connoisseur of pubs; he can spy a stale Guinness tap or faux antique Smithick’s sign from 50 paces. A pub named after the old-school thatch roofs that are fast disappearing from Ireland sounded a little Disneyfied. “It’s not too touristy, is it?” I asked Rose. She looked at me as if I was insane, “Ur, um, there aren’t many tourists in Birr a’tall, miss,” was her reply. 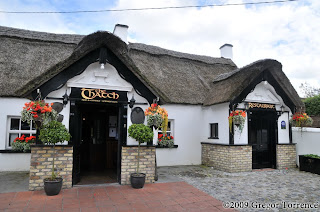 The Thatch is in a nondescript suburb, an old white washed cottage with the eponymous roof. As we entered the low door into the rather close entry way, the manager, Des Connole, came up to us all smiles and asked us “friends, would ye happen to have a reservation then?” We didn’t, but it mattered little, he whisked us past the wedding party in the restaurant into the bar side of the pub. He seated us in front of a enormous stone fireplace, filled our beer orders (Guinness all around), and told us all about his relatives in New York State seemingly all at once.

Directly to our right seated at the bar was an old gentleman with grayish hair slicked back, a three piece Donegal tweed suit, dark sunglasses, and a glower. He couldn’t look more like Samuel Beckett if he tried. The weight of the world seemed to be upon him, he talked to no one, though everyone in the room seemed to know each other, instead he just stared into his pint, head in hands. He moved only to go out for a smoke. When he returned, my dad whispered to me, “Ah, glad he’s back, old boy. I thought he’d gone to the parking lot to blow his brains out.”

I could go on forever about The Thatch. It’s everything you want from a country pub, plus the food was amazing. I mean amazing. Dad reveled in an apple-stuffed pork loin glazed in cider, Mr. Tofu liked his mushroom pastry thingy, and my tandoori prawns were de-lovely. And then, without a word, a bar maid plunked a large gratin dish of mashed potatoes swathed in cheddar, the edges still popping and spitting with butter on the table. It comes with every meal, apparently. Dad took a bite, sheepishly looked at me and said, “Oh, Ive.”

I ate until I was overstuffed, but could not stop. I asked the manager how they were done, and he stumbled through a rough description of it, “It’s just good potatohs, you see. And cream, and butterh, of course.” Next I asked his wife, who was also buzzing about serving tables. She seemed tickled that I loved them so much, especially since I was, as my dad informed her, “a famous cookbook author from America.” Ahem.

She stopped, bar tray against her hip and squinted. “Ay. It’s the potatohs now isn’t it? I’ve been to New York, and they don’t taste like a thing anyhow. But you could try…” And she gave me a rough idea of how the BEST mashed potatoes in the world are made. So I offer you the recipe here. They’re close, but to get the real thing, I’m afraid you’ll have to go to The Thatch.

Garlic Mashed Potatoes with Cheddar
serve 1 Ivy, or 4 normal adults as a side dish

Peel the potatoes, cut into 2 inch chunks and place in a pot with the salt and cold water to cover. Bring the water to a boil, reduce heat and simmer until the potatoes are tender when pierced with a fork. Drain and push through a food mill, potato ricer, or mash by hand until smooth.

Preheat oven to 425 degrees. Stir in half the cream, half the butter, nutmeg and half of the garlic. Taste, season with salt and pepper and pile into a buttered baking dish. Sprinkle the remaining garlic, cream and butter on top. Top with the cheddar. Bake for 20 minutes, until piping hot. Turn on the broiler and broil 4 inches below the broiling element until the cheese is bubbling and the butter is sizzling around the edges.

10 Responses to Irish Mashers with Garlic and Cheddar