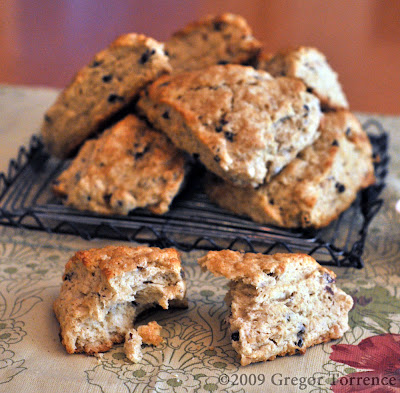 Let me start out this missive by saying that I am not a fan of navel-gazing. You don’t read this blog to get a sense of the size, shape and relative lint of the author’s navel. You’re here because you like/love food. Me too.

That said, I’d like to tell you that I am dedicating this post to my father, who died on December 17th. I am inexpressibly sad to have lost him. I promise I won’t bum you out, though. There’s a recipe and a joke tied to this post. If there’s one thing I learned from my dad it’s “start with a joke, end with a joke.”

In fact, my dad’s greatest attribute was his ability to tell a story and make people laugh. He was a raconteur at the dinner table, at his pub, and on his travels around the globe. The following story was one my father’s most recent favorites. On our trip to Ireland this summer, he shared it with bartenders, doctors, shepherds, bell hops, and anybody else in the Emerald Isle who would lend him an ear. Many people did, and they were glad for it.

Murphy the Sweet Tooth
~as told by Tom Manning

“Picture a humble farmhouse. In the bedroom lies Murphy the cobbler on his death bed. Father O’Malley has given the good man his last rites and the room is quiet as he slips in and out of consciousness. Then, a wonderful aroma of cinnamon and sugar wafts up beneath Murphy’s nostrils and enlivens him. The smell of Mrs. Murphy’s scones baking is so tempting, it makes the dying man sit upright in bed.

With all of his remaining strength, Murphy pulls himself across the house into the kitchen and there, piled high on the table are mounds and mounds of perfect golden brown scones, hot out of the oven. Murphy inhales deeply, a beatific smile spreads across his face. With his last ounce of strength he approaches the table and with a shaking hand reaches for one of the scones… 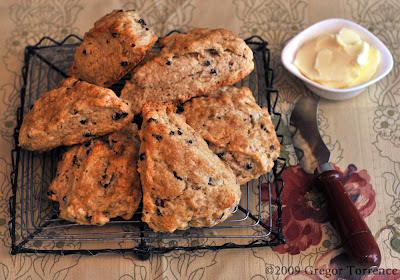 ‘WHAP!’, a wooden spoon comes down hard across his hand.

“Fuck off! Those are for the funeral!” shouts Mrs. Murphy.

Preheat the oven to 425 degrees F. Combine the currants and booze in a small bowl and allow the fruit to plump for 30 minutes. Discard (or drink) the booze, pat the currants dry with a paper towel, and set them aside.

Transfer the flour-butter mixture to a large bowl and fold in the nuts and plumped currants. Whisk the egg into the buttermilk and add all but a few tablespoons of the wet mixture to the flour-butter mixture. Stir until the dough with a rubber spatula until it just comes together, adding more of the buttermilk mixture if the dough is too dry to come together. Turn the dough out onto a very lightly floured surface and knead until the dough is just smooth, a few turns should be enough.

Pat the dough into a 1-inch thick disc and brush it with the milk. Sprinkle the sugar over the top and cut the disc into 6 or 8-equal sized wedges with a chef’s knife. Transfer the scones to a baking sheet and bake until the edges are golden brown, 15-20 minutes. 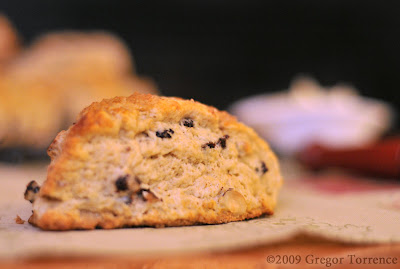 Rest in peace, Papa. I’m sure you’ve got them rolling with laughter in that big pub in the sky. You are missed down here.
-Ive

7 Responses to In the eyes of an Irish man