Will the wicked winds and icy raindrops ever cease? The slow arrival of spring is particularly painful for me because we recently adopted a new dog, a retired racing greyhound named Mini. Or should I say, Princess Mini? Princess wakes early, like any monarch should, and whines until she is fed, walked, and duly petted. So lately, I have been looking for breakfasts that will warm me up after our early morning jaunts through the wind and rain. Oh the dreadful wind and rain.

Thus, I lugged out the O-L-D Crockpot my mother-in-law gave me and have been making over-night oatmeal. Mix oatmeal, water, a little brown sugar, cinnamon and a pinch of salt in an old slow cooker, plug it in right before bed and a healthy hot breakfast will be waiting when you get back from morning walkies. How virtuous, eh? 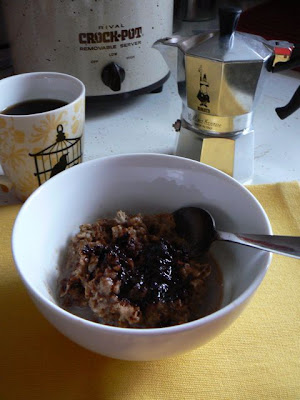 But I have a confession to make. I think eating plain oatmeal is as about as exciting as going for walks at 7 a.m. in the rain. So, this morning I decided to jazz my oatmeal up a bit. I peered into my overstuffed cupboard and low and behold, an enticing can of Ghirardelli’s hazelnut hot cocoa mix was looking me square in the eye. Hmmm….oatmeal+sugary hot cocoa mix. It’s not as eye-crossingly sweet as Count Chocula, but man, it hits the spot early in the morning. And the heart-healthy fiber in the oatmeal and protein in the triticale (a rye-oat hybrid available from Bob’s Red Mill) makes me feel like one of those “early bird gets the worm/my body is my temple-types”. So it’s a win-win.

One note of caution: the old harvest brown Crockpots of days of yore run much cooler than the new fangled stainless steel slow cookers out there. Blame it on our litigious society, but most companies have changed their temperature ranges in the interest of “food safety.” I tried this recipe on the low setting of a new slow cooker, only to find a smoking black shell of goop the next morning. I recommend either cooking oatmeal overnight in an old Crockpot, or cooking it in a new model slow cooker on low for only a few hours. Get to know your cooker before you cook anything unattended.

Spray the inside of the Crockpot insert with cooking spray. Combine the oats, triticale, water, cinnamon, and vanilla in the crock, cover and switch the cooker on to “low”. Cook for 7 to 8 hours, until tender. Do not lift lid until the end of cooking time. Stir in the sugar and soy milk. Add about 1/4 cup of the hot cocoa mix and stir to combine. Serve, sprinkled with additional hot cocoa mix.

Hi! I'm a Portland based cookbook author, food writer and culinary instructor.
View all posts by Ivy Manning →
Irish Lamb Stew with Guinness, My Goodness
Pasta and Meatballs or Eatballs

One Response to Hazelnut Cocoa Oatmeal