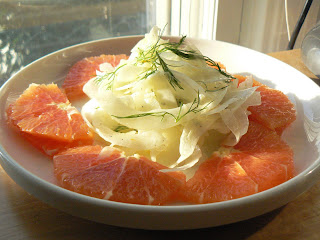 I paused in front of a beautiful display of Cara Cara oranges this week. The somewhat exotic citrus, sometimes called “red navel” because of their reddish-pink flesh, were a good dollar or more per pound than the less flashy navel oranges stacked next to them. Should I or shouldn’t I buy them?

And then it occurred to me, some women buy designer shoes and have no shame about that. What is wrong with buying designer produce? It’s better for your health than shoes that pinch and cause bunions, and besides, I was in the mood for something virtuous and green salads just aren’t as appealing during these cold months. So I picked up a few and put them in my basket.

The fennel that was stacked up across the aisle was looking particularly plump and pearly, so I snapped some of that up, too. The result of my little weakness is this recipe for a crisp, fresh salad that features the lush, not-too-sweet flavor of Cara Cara oranges and the snappy yet mild flavor of very thinly cut fennel.

If you have never cut the peel and pith away from an orange, give it a try. It isn’t hard, it just takes a sharp knife and a few practice cuts to get the hang of angling the knife to cut away the peel and white pith without cutting the precious fruit, as shown here.

Zest 1 of the oranges over a mixing bowl. With a sharp paring knife, cut the top and bottom of the oranges so you have a flat surface to set them on. Cut away the peel and white pith bits all around orange. Cut the orange into 1/2-inch thick rounds, then cut the rounds in half, arrange the fruit around the edges of 4 salad plates.

Shave the fennel with a mandolin into very thin slices; roughly chop them if needed to make them bite-sized. You will need about 4 cups of loosely packed, shaved fennel. Cut the feathery leaves away from top of fennel stalks and chop them roughly.

Whisk the orange zest, vinegar, honey and olive oil together in the mixing bowl. Add the fennel and fennel leaves, salt and pepper and toss to coat the fennel with dressing. Mound mixture in center of salad plates. Serve with a chilled Vouvray.